Is your Gulf Shores home covered from damage or loss from sinkholes?

With all the news recently about sinkholes swallowing up homes, cars, boats, and anything else that's sitting there when the earth opens up, we thought you might like to know.

Sinkholes have been happening for thousands of years, say geologists. When sinkholes do develop quickly, they can be fatal.

In March this year, Florida resident Jeff Bush went missing after an apparent sinkhole opened in his bedroom in the middle of the night, sucking him and his bed deep into the earth. (After several days, search efforts for Bush were called off and he was presumed dead.) 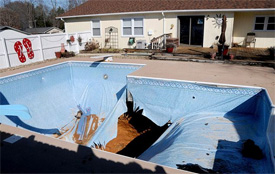 Sinkholes like two others seen this year in Florida form when slightly acidic groundwater dissolves limestone or similar rock that lies beneath the soil creating a large void or cavities. When the overlying ceiling can no longer support the weight of the soil and whatever is on top of it, the earth collapses into the cavity.

Just because one sinkhole opens, does not necessarily mean another nearby is imminent.

Sinkhole insurance is optional in Florida and many other states, and many people have ditched it to save money.

If you opted out of sinkhole coverage, claims for things like cracks in the driveway or fractures in the walls will be denied.

The key is, a local authority must condemn the property. Claims are only paid when a home is unlivable. Every policyholder — even those who've said no to sinkhole coverage — have that assurance.

Also of Interest  Gulf Shores Homeowners Insurance: How to Save

Why is the other sinkhole coverage optional?

It seems to twisted logic: but if you're going to have a sinkhole and you want insurance to pay, you want it to be a whopper.

So, should insurance companies be doing more to prevent sinkholes from becoming catastrophic?

Consider this: when asked recently about how much an insurance company would pay to trim trees that lean precariously over a Gulf Shores home (which is zero, by the way) the Insurance Information Institute said, point blank, a homeowner's insurance policy covers damage — not threat of damage.

So if a tree leans? It's not covered. If a tree falls? It's covered.

And it's the same with sinkholes. Does your house have cracks? The claim will be denied.

Was your house swallowed? Claim approved.

Click here to see some of the earth's most striking sinkholes.

Get more insurance information by clicking the Gulf Shores Insurance link to your right under Gulf Shores Real Estate Categories.